Microsoft Windows 10 is expected to be released in July this year and the builds which are coming out are emphasizing more on fixing the issues rose in previous versions rather than putting new features. But there are few enhancements like the Start menu has been improved and Start experience has been made a bit better. A “New” label has been included next to All Apps which indicates that new applications have been installed into the system. In the Tablet mode the hamburger button will show a bog dot indicating that new apps have been installed into your system. Tablet mode has also been upgraded and users can open the app commands by just swiping in the top edge. The taskbar gets Universal Back button which will work in the same way as in Windows Phone. You may also like to download Windows 10 Build 10122 ISO 32/64 Bit.

Below are some noticeable features which you’ll experience after Windows 10 Build 10130 ISO 32/64 Bit free download.

While we were not expecting a new build of Windows 10 this week, Microsoft decided to surprise Insiders with a new preview. This time, Microsoft has rolled out Windows 10 build 10130 with a few improvements and some polish.
The software giant says that moving forward, we are going to see more tuning, tweaking, and simply more stable and polish version of Windows 10. The company is now trying to get the operating system ready for launch, which is likely to happen as soon as July. With only two months left, Microsoft is more focused on fixing what's already included, instead of introducing more features.
Recently, Windows 10 build 10125 emerged onto the web, unveiling a number of updates, some of which are now present in Windows 10 build 10130. However, today we are going to see everything Microsoft has included since the last official release (build 10122), which will help everyone to have a better picture of what's to come.
Below, you will find all the new changes in Windows 10 build 10130

The software giant includes various tweaks that make the Start experience a little better. In Windows 10 build 10130, you can open the Settings app > Personalized > Start to customize whether you like the Start menu to show apps and content suggestions, display recently opened apps, or show the recently added apps group. 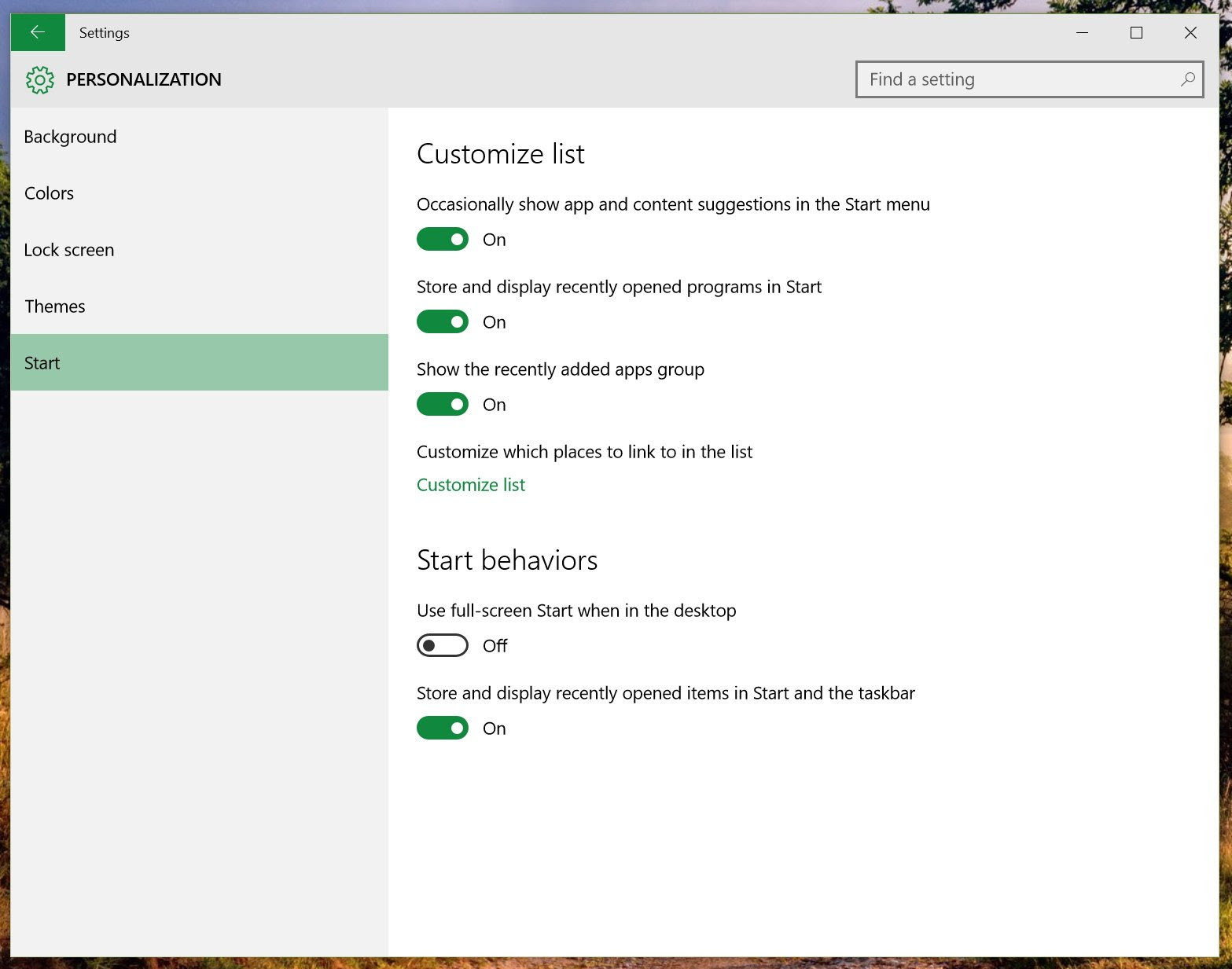 Also, you can now click on Customize list to customize the list of places that appear on the bottom left of the Start menu, by the Power options. Note: Microsoft is also warning that there is a bug upgrading from Windows 10 build 10122 that removes the default File Explorer and Settings. If you experience the issue, you can go to the Start settings to add the places back.
When going to "All apps", users can now click the listing labels (0-9, A, B, C...) to access a new grid with letters contains apps. This new addition will help users to get through the list faster to find an app. 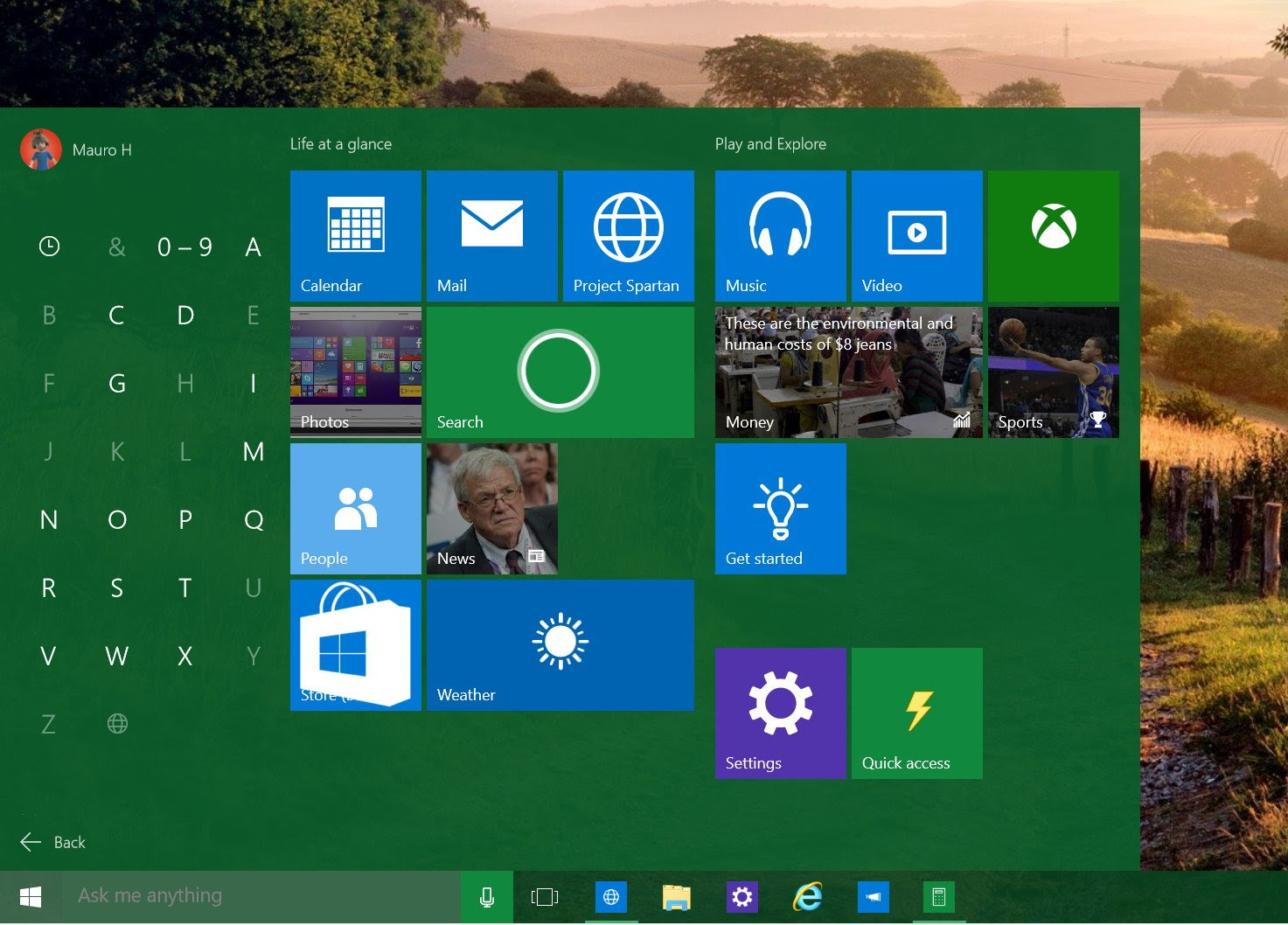 Users will see that a "New" label will appear next to the "All apps" indicating that there are new apps installed in the system. On the other hand, when you are in Tablet mode, the new hamburger button on the top-left, will have a "big dot" indicating a new app has been installed. 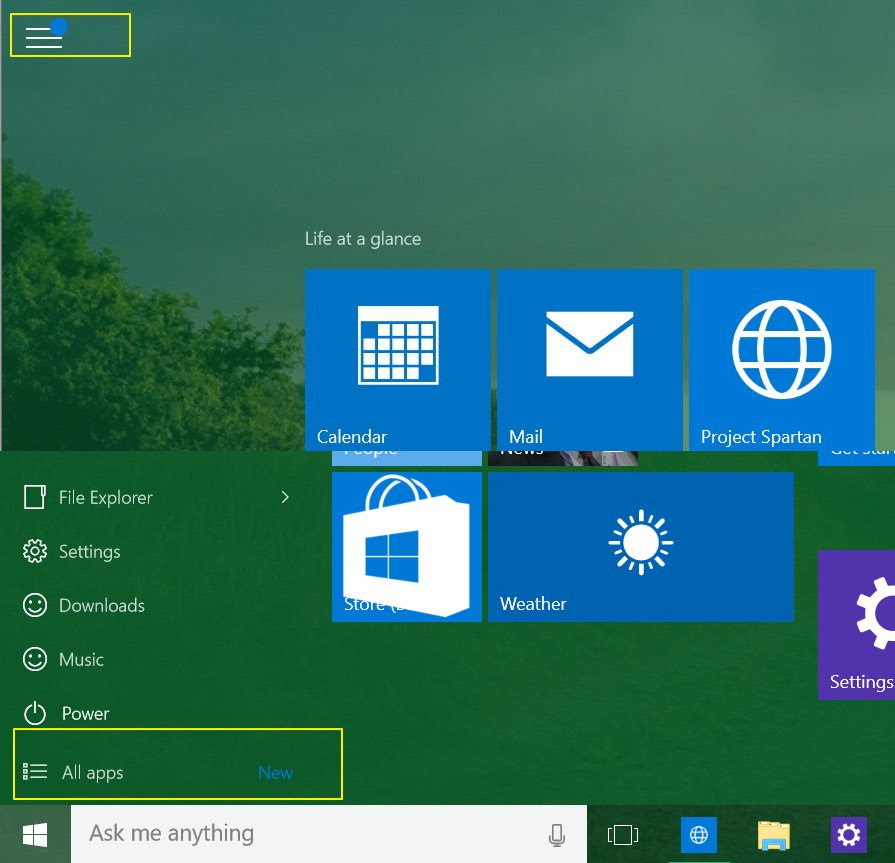 Also, this new build gets rid of the 3D flipping animations for Live Tiles in favor of a similar animation that Windows 8.1 users see in the Start screen.
Jump Lists
In this new version, Jump Lists menus have been updated to match the language design Microsoft is following with Windows 10. And Jump Lists not only appear when you right-click an app or File Explorer in the taskbar, but also in the Start menu. 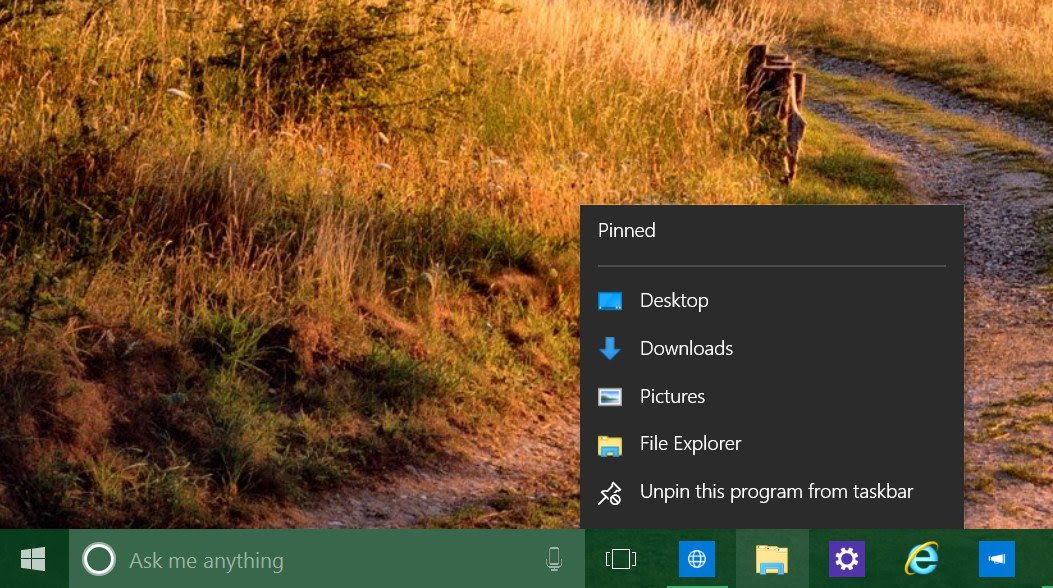 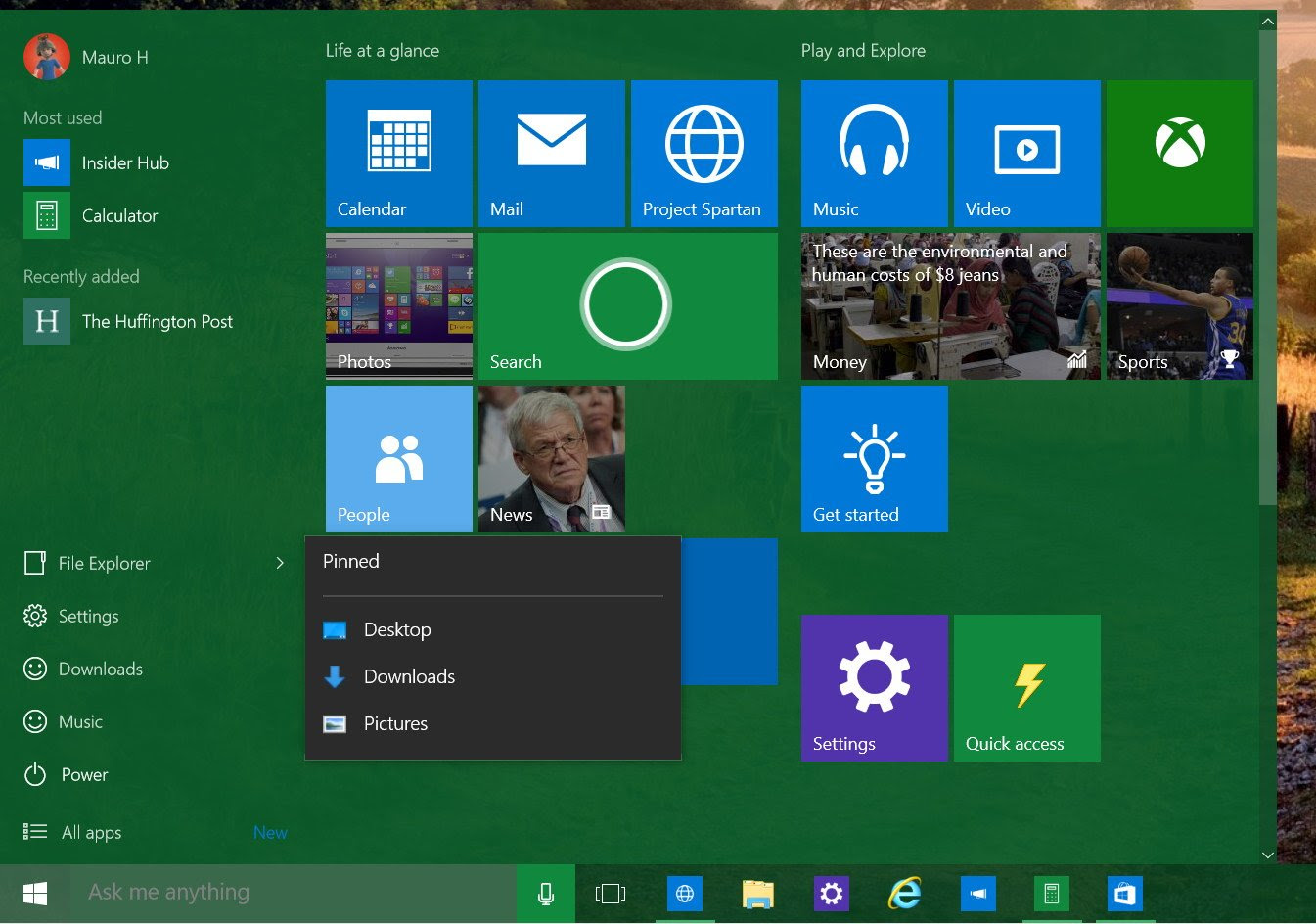 Continuum
Continuum, also known as Tablet mode, has been slightly updated. Now users can swipe in from the top edge to open the app commands, just like Windows 8.1 users expect.
Officially in Windows 10 build 10130, the taskbar gets a universal back button that works in the same way as on a Windows Phone. Accessing and drilling inside an app, you can now click the back button to jump a step back, and if you are in the homepage of the app, clicking the back button will move out of the app to the previous app or Start menu.

Desktop
The desktop environment in Windows 10 gets various tweaks and improvements. The most noticeable change is the new updated set of icons. Users will now see updated icons for File Explorer, Quick access, This PC, Network, drives, and pretty much all around the operating system.
The new icon design matches the Windows 10 design language. They are more consistent and cohesive across the OS. They are a very similar to what users are used to seeing in Windows 7 and Windows 8. Microsoft also notes that the new icons are more consistent between desktop and mobile, which means that apps like Word and Excel will look similar on any device. 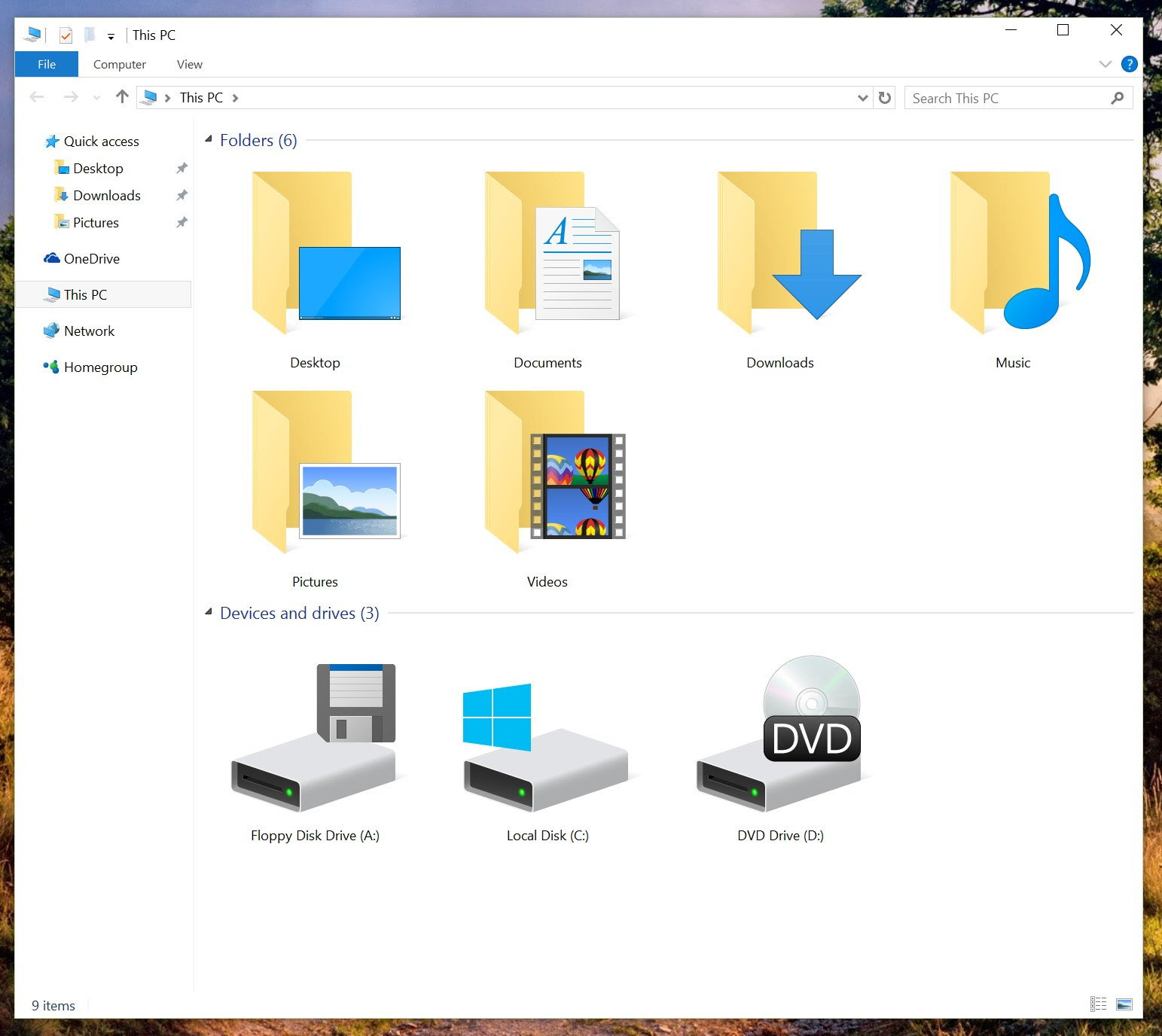 Other subtle changes include a new taskbar animations for actions, such as moving files and downloads. For example, now downloads fill vertically as you can see in the image below.

In Windows 10 build 10130, there is no more ugly borders in the Action Center. It looks more integrated into the operating system. 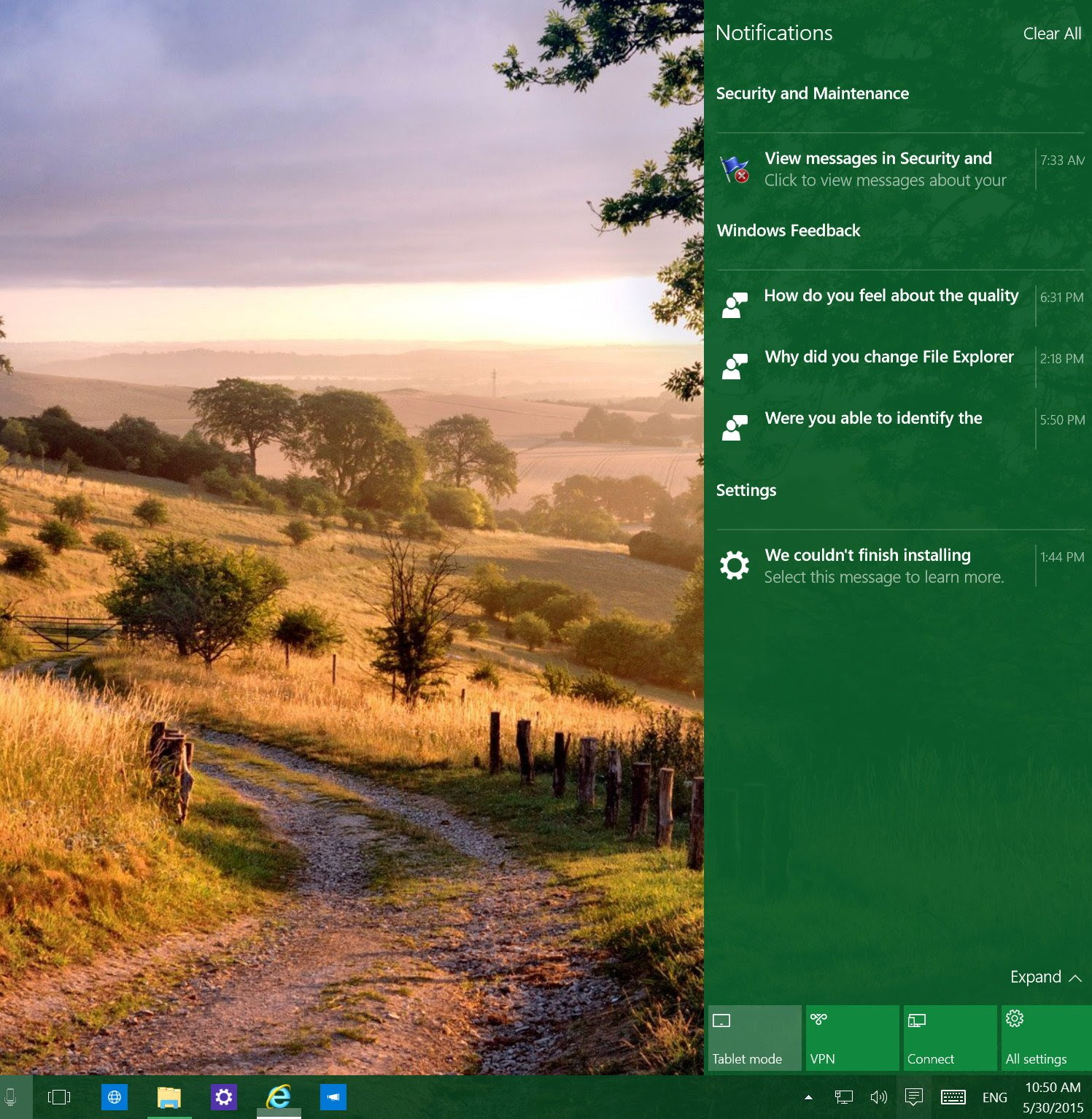 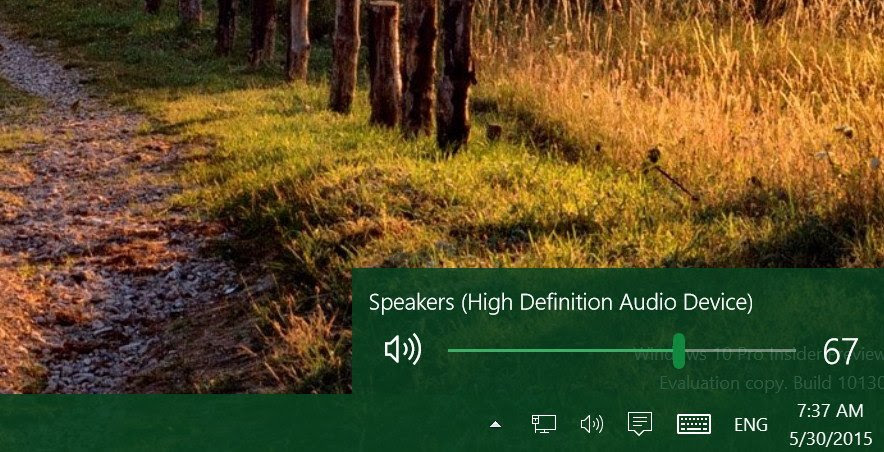 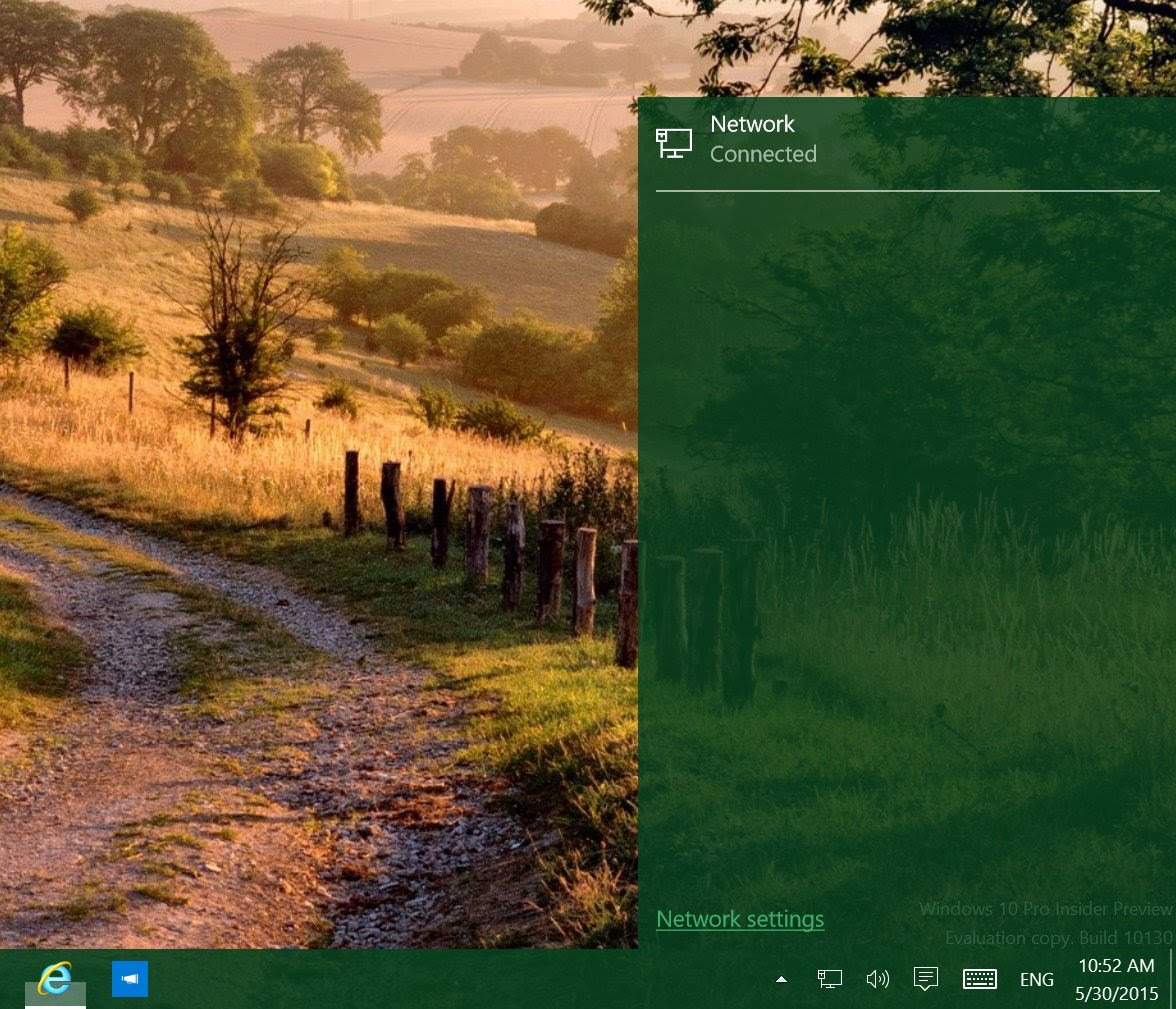 There is a print feature in Windows 10 and Microsoft is now renaming it to "Microsoft Print to PDF". If previously, you were using "Print as a PDF", you can delete this option by going to Control Panel > Hardware and Sound > Devices and Printers, then right-click Print as a PDF and finally select Removed device. 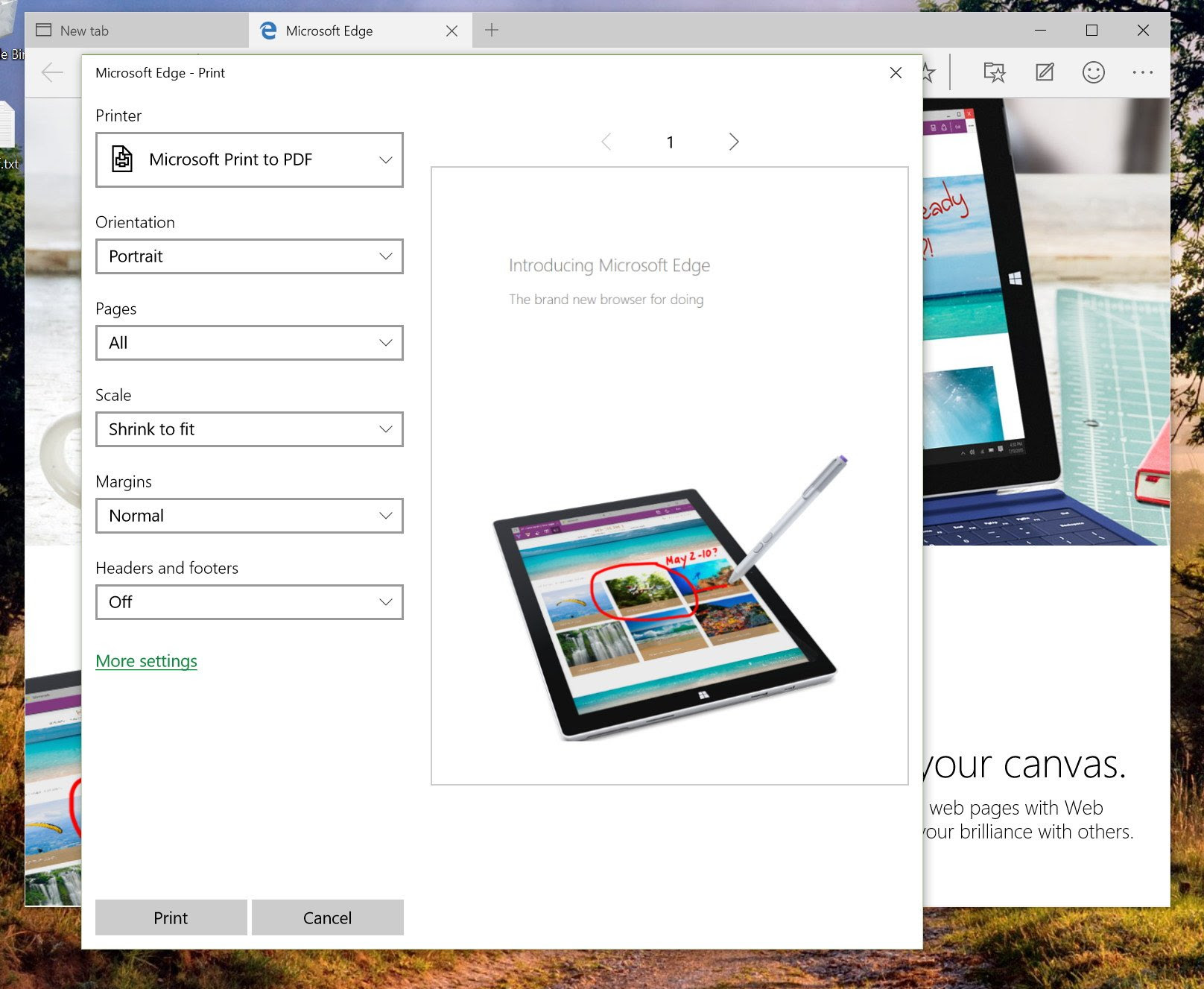 On the taskbar, Microsoft is finally changing the behavior for Virtual Desktops. Now the taskbar will only show windows on the current desktop by default. If you want to change this behavior, you can go to Settings apps > System > Multitasking > Virtual Desktops And on Movies & TV, users can now play videos in full-screen mode.

Microsoft is tweaking Cortana a bit more in build 10130. Users will notice that the initial setup process has changed with new animations and graphics to make the experience a little smoother. 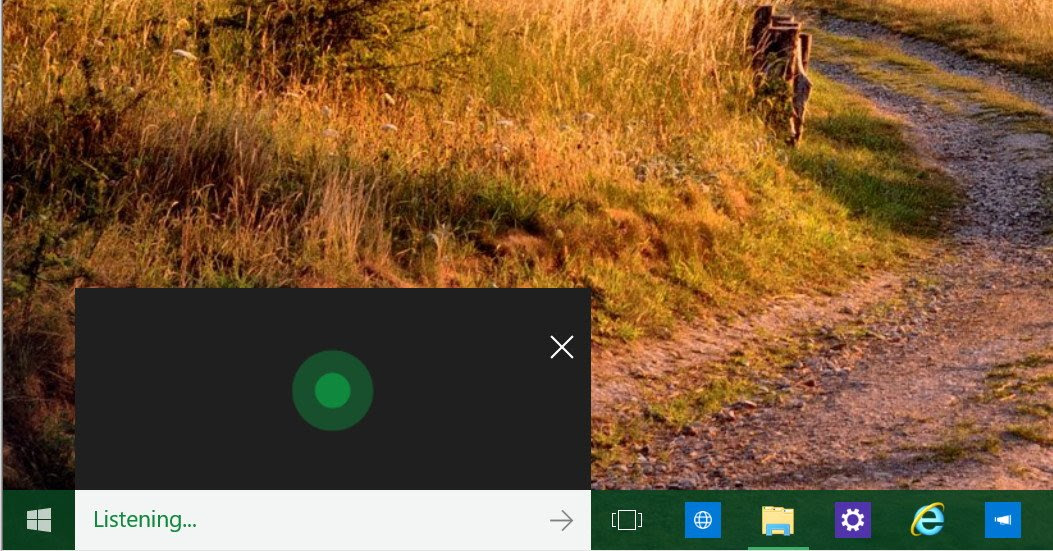 Windows Hello
Windows Hello, which is a new security feature that allows users to sign-in to Windows 10 without a password and only using facial recognition, makes an appearance in this new preview. However, it appears that you cannot configure it at this time (or at least without the correct hardware). 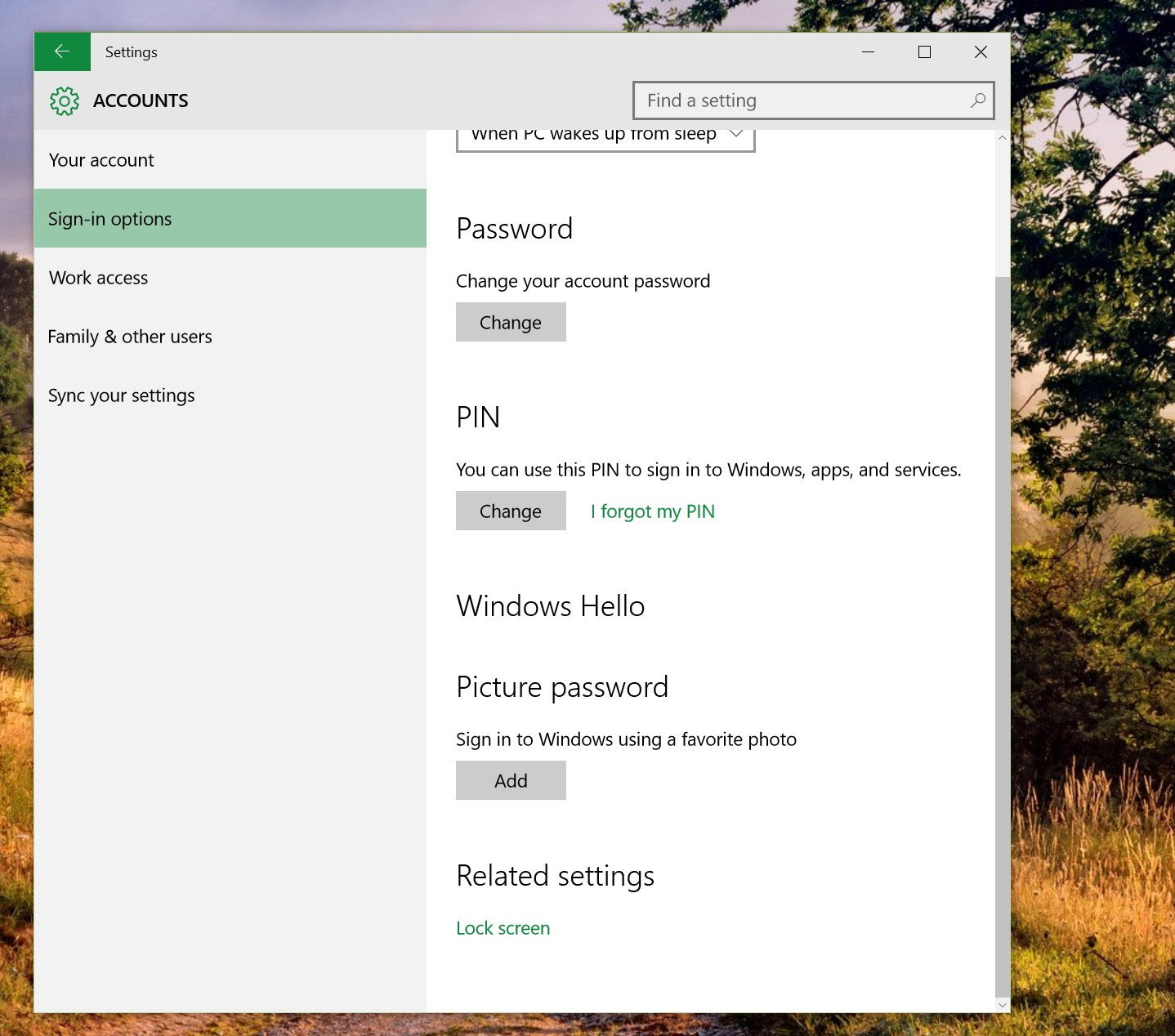 Microsoft Edge
In Windows 10 build 10130, Microsoft continues to call its new web browser "Project Spartan", but the company says that soon they will change it the name to "Microsoft Edge".
In this new build, the web browser jumps to version 15.10130. You can pin Cortana, Favorites, Reading list, and other panes to the software while browsing the web. 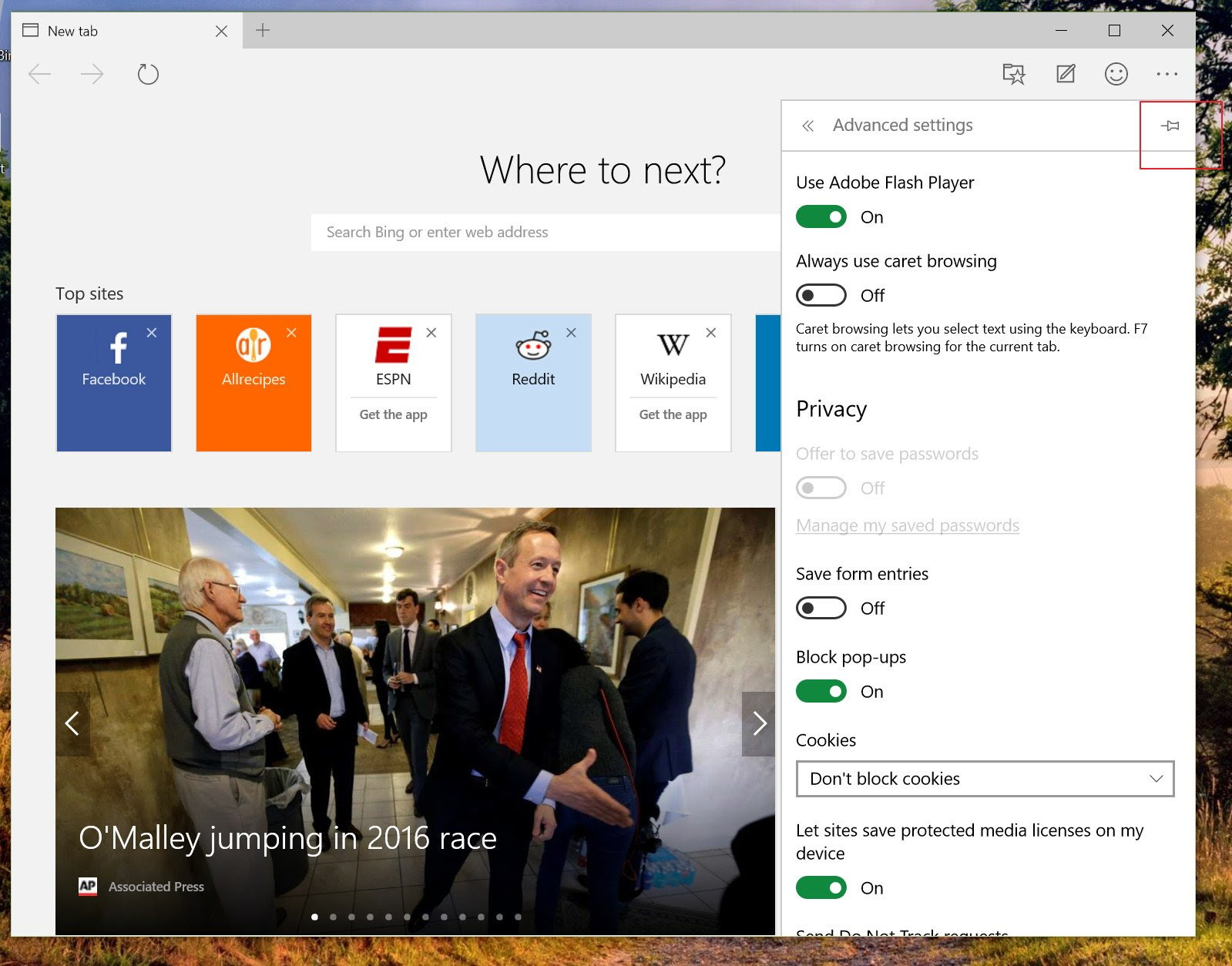 Other changes include improved advanced print options. The address bar badges have also been updated. Reading view also has support for more type of content, window sizes, and device layouts. 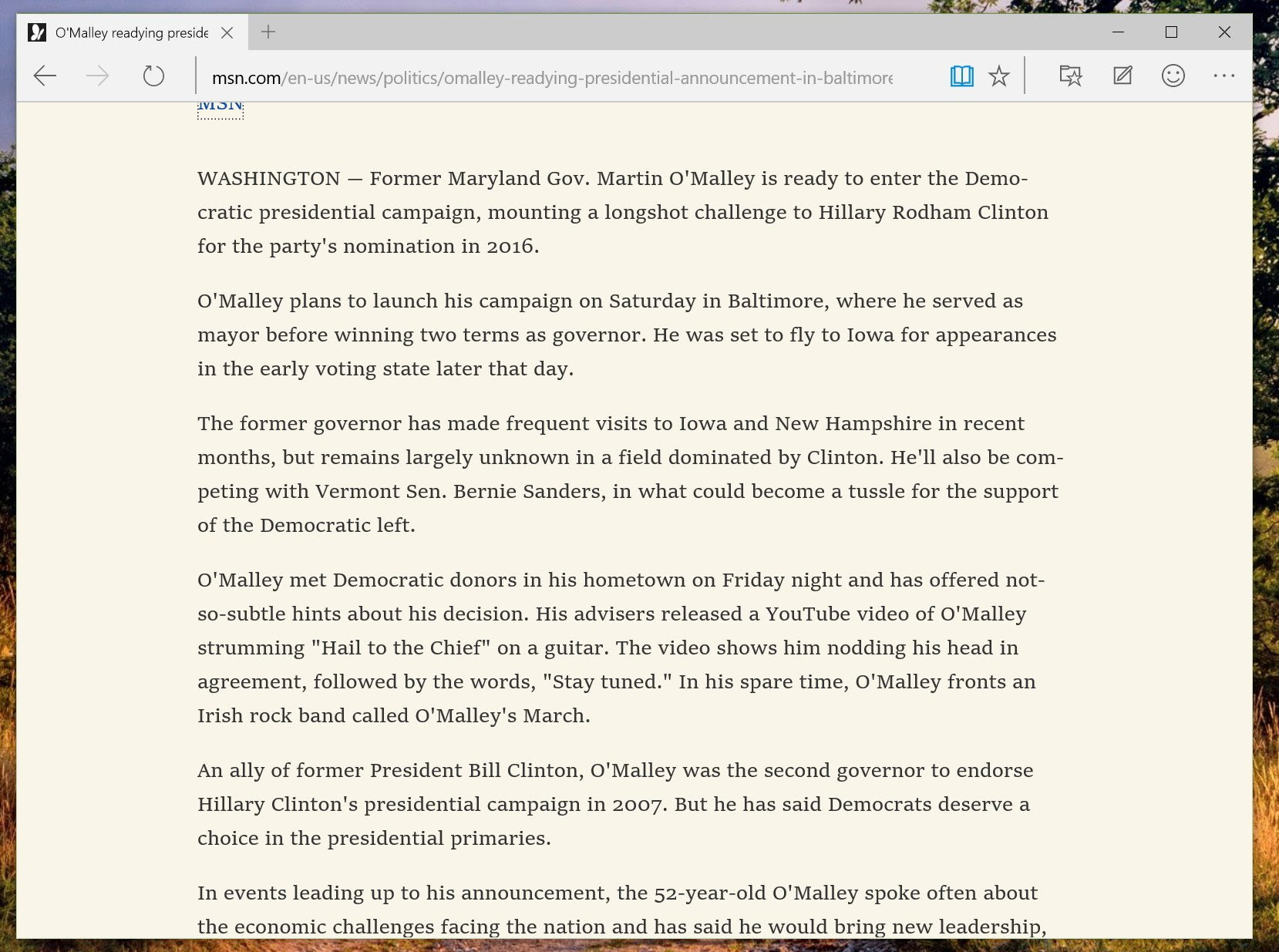 In this new build, users can finally go to sites like YouTube or Hulu and play videos in true full-screen mode.
Finally, the Settings pane is now divided into two sections. The main settings section features options to configure new tab pages, change default search engine (which you can't change at this moment), reading view, and more. Then there is the Advanced settings where you can enable or disable Adobe Flash Player, change privacy settings, enable or disable Cortana for Microsoft Edge, and more (refer to previous image).
Wrapping things up
Overall, Windows 10 build 10130 looks more polished and stable. Just navigating around and using apps feels more solid than before, but of course I'm only speaking for myself. I'm pretty sure that with different hardware, the operating system will still behave differently, and many Windows Insiders may have a total different experience.There are no big changes in this build, and we won't be seeing major changes either as Microsoft engineers have already locked all the features. They are now just trying to finish the operating system by summer time.
Even though there are still some bugs that need to be worked out, Microsoft says that build 10130 is expected to release to the Slow ring of updates. The ISO files for this build are likely to be available soon.
Windows 10 has come a long way, how do you feel about the results? Tell us what you think in the comments below.
Posted by Shivam Patsariya
Share to: